Woman of the year – nominate now 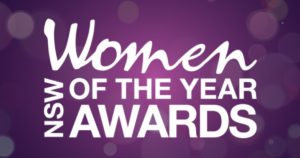 The Member for Oxley, Melinda Pavey MP, is encouraging nominations for the 2019 NSW Women of the Year Awards.

Mrs Pavey said the Awards recognise women who have demonstrated excellence in business and society or made outstanding contributions, both personally and professionally.

“So many women pour their heart and soul into their careers, families and volunteer work, strengthening and enriching our community,” Mrs Pavey said.

Minister for Women, Tanya Davies, officially opened statewide nominations ahead of the 2019 Women of the Year Awards program, which will be celebrating its eighth year.

“These Awards are our chance to recognise exceptional women across the State, particularly those who have excelled despite adversity or made contributions that improve the lives of others,” Mrs Davies said.

“Women from all walks of life make outstanding contributions to our communities while overcoming gender inequity to pursue their personal and professional goals.”

The 2019 NSW Women of the Year Award categories include:

Nominations for 2019 close on Sunday, 11 November 2018. For more information or to nominate visit www.women.nsw.gov.au. The winners will be announced at an Awards ceremony on Thursday March 7, the day before International Women’s Day.