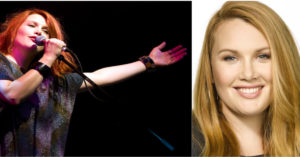 In this our fifth interview of speakers and presenters that will be attending Ignite MNC 2018 we feature this year’s MC, Clare Bowditch.

As she works on her first book, and her eighth album, she also hosts the QANTAS Radio’s Australian Music Show.

As the beloved host of the “Afternoons” radio show on ABC Melbourne, she spoke and made friends with over 250,000 listeners daily.

I grew up in Melbourne, in the seaside suburb of Sandringham, but if you wanted to fit in, you’d best call it “Sandy”. The waves there were very very small, but they were all we knew.

Country, all the way. Having said that, I still live in the city, but I’m near a creek, and that’s something.

I consider myself more of a “Professional Amateur” at most things: always have.  I like it that way. It keeps me learning, keeps me in “Beginners Mind”.

My head. From a young age I’ve been aware that I have a particularly ambitious and vicious inner-critic. It has pushed me in my career, but it’s also pushed me into bushes and other difficult places. My ongoing challenge and opportunity is to use what I know as an adult to direct that ambition, to use my sensitivity and self-doubt, and use them in my work without letting them overwhelm me. So far, so good.

I’d start right down the bottom of Maslow’s heirachy of needs with the basics: the right to safe shelter, food, clothing, a shower, and respect. We’re not all born with the same opportunities. All people deserve half a chance at living a decent life, and if we can help provide that, we must.

I know I should say something inspiring like “Don’t give up, little Bowditch!”, which is good advice, but really? I’d give myself a good lesson in compound interest, the value of saving, and I’d advise myself to buy 20 acres of pristine land on the Mid North Coast of New South Wales. Make it 40. 40 acres.

The best advice you have being given during your life?

Back yourself, and give people the chance to know you. In addition, never stop working hard on your craft. Never be complacent. Don’t expect people to respect you if you’re not respecting yourself.

What are you looking forward to most about attending Ignite MNC at Bellingen?

The people, of course. I cannot wait to get there and meet everyone. It’s an absolute privilege to be invited to host an event like this and I’ll be there to be useful in any way I can. We’re gonna have a bloody great time and I bet you, in between all that learning, we’re gonna have quite a few laughs.

What are your plans for the next year ?

I’m finishing my first book, my eighth album, and preparing to be the mother of THREE TEENAGERS who got to ACTUAL HIGH SCHOOL (I still can’t believe it. My daughter will be in year 11 next year, and my twin boys are both heading into year seven. How did this happen?)

The Ignite MNC Symposium is a business and community event designed to bring together people who work, run businesses and live in the Mid North Coast. The event is designed to inspire new thinking, vibrant conversations and to form collaborative partnerships. – aka; if you want to do break the mould – to do something different – to find a tribe to support you, to make the Mid North Coast an innovative, inspiring and vibrant place to live and work… For access to further information and tickets visit www.rdamnc.org.au