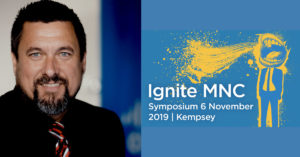 In our sixth interview of speakers and presenters that will be attending Ignite Mid North Coast Symposium 2019 we are featuring Peter Auhl.

On November 6, Peter will be speaking at the Slim Dusty Centre, located in the beautiful Macleay Valley and location for this year’s event. Ignite MNC Symposium 2019 will bring together creative thinkers and inspired innovators from within the region and beyond to talk about “Your World 2030”.

Peter is the 2019 Digital Innovator of the Year, 2017 Chief Information Officer (CIO) of the Year and currently sits at number 6 on the CIO50 list.

He led the Ten Gigabit Adelaide project at the City of Adelaide from concept to implementation. The successful delivery of the project is of global significance and has had an immediate and palpable impact on the Adelaide economy.

In 2016, Peter finished in the top 5 CIO’s in AsiaPAC and received personal feedback for his disruptive innovation from Steve Wozniak and Sir Richard Branson.

We were lucky enough to connect with Peter for a brief but insightful Q&A interview.

Country, I still own a small acreage in the Adelaide Hills and love pottering around a property fixing things or solving problems

Leading a “world first” significant project. With determination, facts and an outcome focus.

The political system, lots has changed since the Westminster System was conceived, we need something that is more relevant and empowers “the people”.

Buy shares in APPLE, no seriously – understand that dyslexia is a gift that allows you to see things in ways that many can’t

Don’t ever give up

Being back in regional areas, listening to others and sharing ideas