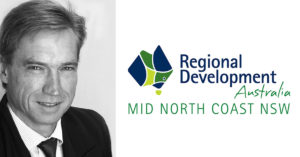 “He is a highly respected and accomplished leader in the healthcare field, one who has made great contributions to the industry through the many esteemed positions he has held.”

More than a quarter of a century of advocating for improved access to healthcare services will be acknowledged when Mr Stewart Dowrick (pictured) is conferred an Honorary Doctorate by Charles Sturt University (Charles Sturt).

The Chief Executive of the Mid North Coast Local Health District will receive the honour at a graduation ceremony held in Port Macquarie on Monday 9 December.

The University Council will recognise Mr Dowrick’s exceptional achievement and service to the University and its regions by conferring upon him a Doctor of Health Studies (honoris causa).

In the citation supporting Mr Dowrick’s nomination for the honour, it was written he “is held in the highest regard by the health sector, government and education institutions alike”.

“His passion and commitment to, and leadership in, improving regional health outcomes, services and education to provide a better future for all in regional Australia is unwavering.

“His ethos clearly matches that of Charles Sturt University; to create a world worth living in and acting for the public good.”

“He is a highly respected and accomplished leader in the healthcare field, one who has made great contributions to the industry through the many esteemed positions he has held.

“It is on behalf of Charles Sturt University and with no small amount of pride that I congratulate him on this recognition.”

Appointed the Chief Executive of the Mid North Coast Local Health District in 2011, Mr Dowrick works with the region’s clinicians and the community to provide healthcare through strategic and quality management.

He began his career in healthcare administration at the Children’s Hospital at Camperdown in 1989. Since moving to the Mid North Coast in 1999 he has played a pivotal role in many of the region’s major healthcare undertakings, including overseeing the $104 million expansion of Port Macquarie Base Hospital and the $81.9 million Kempsey District Hospital Redevelopment Project.

Mr Dowrick said he was “extremely humbled and grateful to receive this honour”.

“As much as this Honorary Doctorate recognises my contributions to the health sector, it also reflects the shared vision my colleagues and I have to delivering excellence in regional healthcare,” he said.

“Over the past 30 years I have seen incredible growth and change in the health sector and while there have been great achievements across rural and regional health, there is still important work ahead in the future as we strive to meet the challenges of a growing and ageing population.

“My colleagues, family and friends have all made valuable and important contributions to my career, and have helped shape who I am and supported me to be able to achieve all that I have throughout my career in health.”

Mr Dowrick holds undergraduate and postgraduate degrees from the University of NSW and University of Newcastle, and is a graduate of the Australian Institute of Company Directors.

He will have the Honorary Doctorate conferred upon him at the Charles Sturt graduation ceremony held at The Glasshouse at 6pm on Monday 9 December.