The Mid North Coast comprises an area of 17,218 square kilometres, halfway between Sydney and Brisbane. It is currently made up of the following Local Government areas: Coffs Harbour, Bellingen, Nambucca, Kempsey, Port Macquarie – Hastings and the former Greater Taree LGA – now an amalgamated part of “MidCoast Council”. It also includes the World Heritage Area of Lord Howe Island, about 600km east of Port Macquarie. 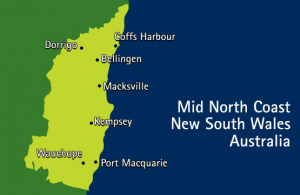 The Mid North Coast lies between the Great Divide and the east coast. The landscape is typified by winding rivers that feed lush hinterland, and over one hundred kilometres of pristine beaches. It benefits from a high rainfall and is considered by many to have the most ideal climate in Australia.

The region has a population of around 269,000 people. The largest centres are Coffs Harbour and Port Macquarie. Both have significant airports and are less than an hour’s flight to Sydney or Brisbane. The dual lane upgrade of the Pacific Highway also puts the region within a four hour drive of the major centres of Sydney, Newcastle, the Gold Coast and Brisbane.

The Mid North Coast is home to an array of vibrant, modern and sometimes eclectic townships that attract 5.6 million visitors each year.

Combining some of Australia’s most beautiful coastline, with friendly communities and plenty of business opportunities, gives the Mid North Coast its unique work life balance. With such a wealth of business opportunity, culture and natural assets on offer, why would you live or work anywhere else?