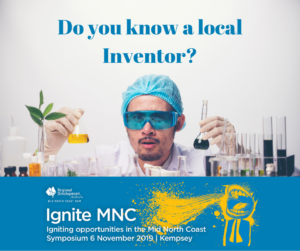 Calling Inventors…. Are you, or do you know, a local inventor?

We are searching for people who have created an invention either on the Mid North Coast or further afield.

The Ignite MNC 2019 Symposium coming up on the 6 November in Kempsey, embraces the theme of “Your World 2030”.

Australia is rich with inventors…

Most of us would have heard about Australian inventions such as the Hills Hoist, Esky and Ugg boots.

In fact, the Akubra Hat is still made in Kempsey, not far from where Ignite MNC will be held this year.

We Aussies are also credited with inventing the car radio, dual flush toilets, solar hot water and google maps. The first version of “Google Maps” was invented by brothers Lars and Jens Rasmussen and further developed in Sydney before being pitched to Google in 2005 when “Google Maps” was born.

Aboriginal inventions include stone cutting tools, the digeridoo, the wommera and the boomerang.

In medicine, Australian technologies include the electronic pacemaker, spray on skin, the humidicrib, penicillin and the cochlear implant.

While we have highlighted a number of fabulous inventions that have changed millions of lives and shaped our world, these are only a few and there are many more on the way.

It seems we have brought our Australian sense of fun along on the creative ride. The “Selfie” and “Streaking” have also been attributed to starting here too.

Inventions of today, and our past, pave the way for our future.

If you know of a local inventor let us know at ignitemnc@rdamnc.org.au!

Early, Early bird tickets are available until the 14th September or until sold out, so click HERE and grab your tickets today!