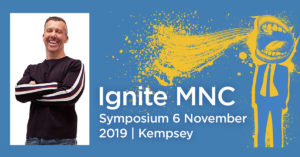 In our fifth interview of speakers and presenters that will be attending Ignite Mid North Coast Symposium 2019 we are featuring keynote speaker Steve Sammartino.

On November 6, Steve will be speaking at the Slim Dusty Centre, located in the beautiful Macleay Valley and location for this year’s event. Ignite MNC Symposium 2019 will bring together creative thinkers and inspired innovators from within the region and beyond to talk about “Your World 2030”.

Steve is Australia’s leading Futurist with unsurpassed credentials. He’s created technology world firsts, written extensively and has a rare ability to communicate it all on stage. His high-octane keynote will change how you see the world.

Steve starting coding at age 10 and had his first startup by age 12. He has since built and sold a number of businesses. As a futurist, he’s ahead of his time. He launched one of the first Sharing Economy Startups – Rentoid.com in 2006. Respected global business media including Forbes, Fast Company and TechCrunch credited it as the start of the sharing economy movement giving birth to Uber and Airbnb. Steve later sold it to a publicly traded company in Australia.

Steve is mentor for startup entrepreneurs and a technology investor. His ability to see the future is ratified by this fact: His portfolio has grown more than 100x the original investment.

Many talk of viral marketing – but Steve has done it – his Youtube channel has over 10 million views. He’s had the leading business blog in Australia for more than 10 years and is a multiple winner of the best blog awarded by Smart Company.

Sammartino taught undergraduate students at The University of Melbourne for 5 years, which is Australia’s highest ranked and most prestigious University.

He has 2 bestselling books: The Great Fragmentation which was translated into multiple languages and his recent release The Lessons School Forgot – which has become the topic of his recent TEDx talk in Australia to rave reviews. You can find his talk here

Steve found time to sit down with us and had a quick chat about his background and hopes for the future.

On a farm in Werribee Victoria

Country – I just bought a farm outside of Geelong. I think in the country we can have our cake and eat it too now as technology bridges the gap of geography.

I’m a futurist and have an intimate understand how technology reshapes business, society and the economic system.

I hope we’ve moved in a positive way to respect our environment more. I’m certain data will become our own personal asset that we control and that many emerging technologies will be common place like 3d printers / flying cars and autonomous transport. I think more people will ‘work from anywhere’ as digital nomads and craftspeople.

Unlearning industrial thinking. Going out on my own to share ideas with no certain income. I treated my ‘self employment’ as a job – did the hard work and set myself goals based on the right behaviours, rather than the right outcomes. Behaviours lead to success – A positive outcome could just be dumb luck.

Outlaw lobbying around the world. It’s what stifles positive change and makes our elected leaders serve financial interests instead of who elected them. It contributes significantly to many problems not being solved.

Don’t grow up too quick – enjoy your childhood while it lasts it’s wonderful.

My family. The true gift is having a meal with those we live together – not a famous stranger.

Never grow your vegetables in someone else’s garden.

Sharing the idea that geography is no longer the barrier it used to be.